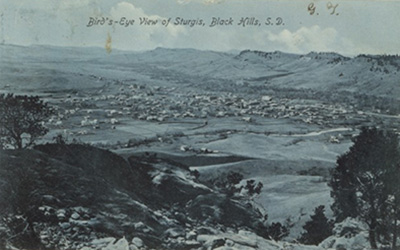 The Sturgis Fire Department was formed on March 17, 1887 when residents of the town of Sturgis, Lawrence County, Dakota Territory, held a meeting to form a "Fire Board." Once the board was created, the members agreed to meet at 7:00pm on the first Friday of each month. During one of the first meetings, the Fire Board directed their president to obtain information concerning the purchase of a used or new hook & ladder truck from a manufacturer in New York state. On May 20, 1887, the board agreed to purchase a hook & ladder truck for the sum of $450.00, thus forming the Key City Hook & Ladder Company #1. The Fire Board also agreed to purchase a hose cart thus creating Key City Hose Company #1. Shortly thereafter, the department ordered another hose cart giving the Key City Hose Company two carts by January 22, 1889.

In May of 1895, the Sturgis Fire Department joined the Black Hills Fire Association. Later on July 19, 1896, the Fire Department Board of Directors commissioned to have a hose tower constructed at the city’s expense. Unfortunately on September 28, 1901 the Department commissioned to have the hose tower torn down because it did not meet the needs of the department during cold weather. So on October 16, 1901, the Department agreed to utilize the lumber from the old tower to construct a new tower, which would work during all weather conditions.

On March 20, 1911, the Sturgis Fire Department was called to a special meeting by the City of Sturgis. The mayor directed the department to provide fire protection to Fort Meade until troops returned from the Spanish-American War. Fort Meade was an Army post located just east of Sturgis. Ironically, not much more is known about the history of the Sturgis Fire Department from this date until the 1950’s due to a fire that caused a loss of records.

Today, the Sturgis Volunteer Fire Department serves and protects the community of Sturgis, and a 580 square mile area of Meade and Lawrence Counties, South Dakota. The emergency response area also includes the Fort Meade VA Medical Center, the historical Fort Meade Recreational Area, Bear Butte State Park and the northern edge of the Black Hills National Forest. SVFD Volunteer Fire Fighters serve a primary population of 13,000 and mutual aid to more than 25,000 people in Meade and Lawrence counties. The fire station is centrally located in the community and will act as the main station as the community grows and additional stations are constructed. This helps keep response times reasonable and to keep insurance rates in check. The City of Sturgis currently has a Class 6 ISO fire rating, which reflects a savings in insurance premiums for the entire community.

The City of Sturgis assists the Sturgis Volunteer Fire Department with an annual budget for fire station utilities, fuel, and equipment maintenance. Most of the fire department's equipment has been purchased using donated funds, grants, and memorials. Additional funding is made possible by the sale of Fire Department Merchandise such as patches, hats, and T-shirts. SVFD sells merchandise online, and at the station during the Annual Sturgis Motorcycle Rally. These year round sales serve as a fundraiser to offset costs of operations and to purchase new fire fighting equipment.